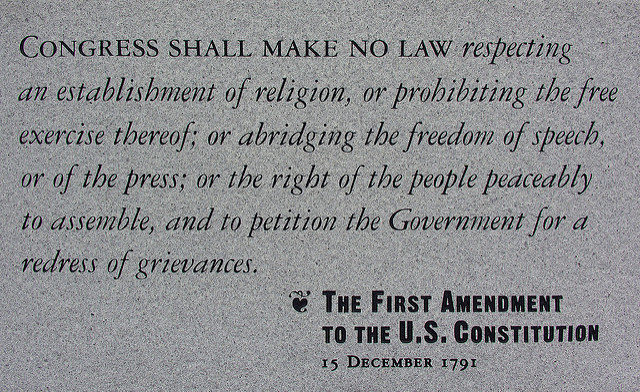 There was once an industry reviled by the elite in one area of the country because they sold a product that was unpopular with the elite and the government didn’t want the regular citizen to have.

The industry was targeted with a litigation campaign - sued to the tune of $300 million - until the Supreme Court put a stop to it, ruling that the industry had a constitutional right to sell their product.

Northern newspapers engaged in “negative reporting on racial issues” in the South were targeted by elected officials, who used libel and defamation litigation as their weapon, until the Supreme Court’s landmark New York Times v. Sullivan case. In their ruling on that case, the Supreme Court held that to prove defamation public figures must show the publisher knew the information was false or acted in reckless disregard of its truth or falsity, and not just that it reflected negatively on the public figure.

In other words, according to Professor Andrew McClurg, the Supreme Court:

...expressly endorsed a right to be negligent in defaming public officials and public figures to protect free speech.

McClurg writes that the Second Amendment also enjoys this “right to be negligent,” but its right is conferred through legislation.

The common law has conferred near complete immunity on gun owners and sellers who fail to secure guns from theft when they are subsequently used to cause harm.

Why are these two amendments the only ones afforded this right, and why was one granted through legislation and the other through the courts? University of Tennessee College of Law Professor Glenn Harlan Reynolds explores those questions in an article in the Florida Law Review.

"In short, the common explanation for these ‘rights to be negligent’ lies in the fact that both First and Second Amendment rights were, at different times, targeted by litigation campaigns involving cooperation...between private litigants and government actors, where the litigation was focused more on limiting the extent of the rights than on compensating discrete injuries."

Justice Hugo Black wrote in his concurrence to the Sullivan opinion that the lawsuits were a “technique for harassing and punishing a free press.” The harassment was so successful that even The New York Times killed stories and advised its reporters to stay away from Alabama in order to avoid additional lawsuits.

The Montgomery Advertiser called the libel suits a ‘formidable club to swing at out-of-state press,’ and observed that ‘the recent checkmating of the Times in Alabama will impose a restraint on other publications.’

Without the protections set forth in Sullivan, the Court believed “the tort system might be used by powerful interests to undermine an important part of the Bill of Rights.”

In these cases plaintiffs weren’t seeking to silence those who might expose their bad acts, but sought to use litigation to accomplish what they weren’t able to accomplish legislatively:

For many big city mayors and gun control advocates, filing lawsuits against the firearms industry represents a way to pursue gun control policies that they have failed to achieve through the political process. . . . So they have turned to the courts, asking judges to impose gun controls that they believe would otherwise be passed by an uncorrupted legislative process.

With the gun-based tort actions it was Congress, not the Supreme Court, who acted halt to the “abuse of the tort system to limit the scope of a constitutional right” by passing two laws limiting the ability of plaintiffs to sue.

As Professor McClurg notes, the Protection of Lawful Commerce in Arms Act provides extensive tort immunity to gun manufacturers and gun dealers in both state and federal court. The Child Safety Lock Act limits liability of individuals for negligence in securing firearms. Similar to the effect of Sullivan on the libel campaign, this legislation largely ended the anti-gun tort litigation campaign.

Now that we see the parallels in the ways libel suits and gun-based tort actions have been used as political weapons and how that threat to fundamental liberties has been dealt with by the Supreme Court and Congress, we return to the original questions: Why do only the First and Second Amendments have this right to be negligent? And why was protection offered by the Supreme Court in one case and the other by Congress?

With regard to the first question, one possible answer is that, as Kopel and Gardner note, only the first three amendments in the Bill of Rights offer substantive, as opposed to procedural, protections.

And, Reynolds notes, though litigation may bring about major changes over time, the use of the judicial branch to fight political battles instead of addressing specific harm suffered by an individual or corporation “may seem excessive,” particularly when constitutional rights are threatened.

Reynolds asserts that the most likely reason for the differing origins of “rights to be negligent” is timing. The Sullivan case arrived at the Supreme Court through its normal course and after “the First Amendment right to a free press was well-established.” In contrast, when Congress passed the “right to be negligent” statutes, the Heller case hadn’t been decided by the Supreme Court and the “extent...of Second Amendment protections in the judicial branch” was unclear.

There is also the possibility that the legislative branch wanted to flex its muscle.

While judicial decisions, by their nature, can have regulatory effects in a common law system, a public-private litigation partnership aimed at end-running legislative majorities is something different, and a threat to the role of the legislature itself. As such, it should not be surprising that the legislature might take steps to defend its role against encroachment.

Reynolds doesn’t give an opinion on which possibility he believes is most likely, but that the bottom line is that both institutions chose “the Constitution over competing values,” as they should.