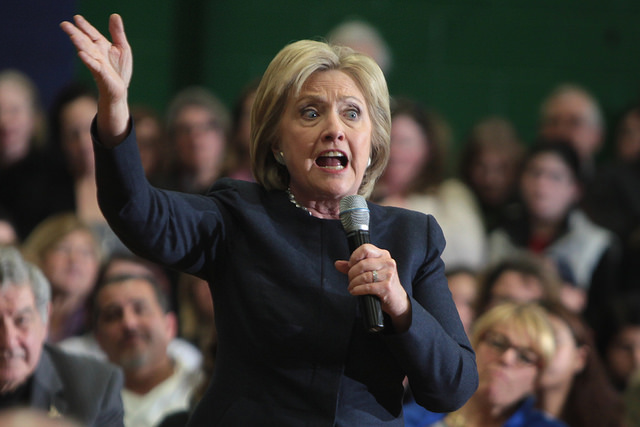 IJ Review: The DC Gun Control Case Was Not About 'Toddlers'

In Wednesday night's Presidential debate, Hillary Clinton took the gun control mantra that "it's about protecting children!" just a little too far when asked about her opposition to the Supreme Court's opinion in DC vs. Heller.

If her analysis of Heller is indicative of her legal reasoning abilities, it's no wonder she didn't pass the DC bar exam.

From Andrew Clark at IJ Review:

Earlier this year, a Hillary Clinton advisor said she believes that the 2008 case was “wrongfully decided.” That's because the Supreme Court specifically asserted, for the first time, that the Second Amendment right to gun ownership applies to individual Americans - and the left can't be having that. (Merrick Garland, by the way, indicated he opposed this decision too.)

DC v. Heller, decided 5-4 by the Supreme Court in 2008, was a landmark gun rights decision that overturned the District of Columbia's decades-old and widely-encompassing handgun ban. But when asked about the case last night, Hillary Clinton dismissed the vast implications of DC v Heller by chalking her opposition up to nothing more than a desire to stop toddlers from getting guns:

...I disagreed with the way the court applied the Second Amendment in that case, because what the District of Columbia was trying to do was to protect toddlers from guns and so they wanted people with guns to safely store them. And the court didn't accept that reasonable regulation, but they've accepted many others.

In the city's 30-page petition to the Supreme Court defending their ban, the government admitted the city was trying to fulfill a laundry list of gun control goals, including keeping guns away from children, but also suicide prevention, a reduction in the homicide rate and domestic violence, and curbing mass shootings.

Despite these gun control arguments, the Supreme Court overturned the ban on the grounds that an individual's right to keep and bear arms - in this specific case, a police officer named Dick Heller who was not allowed to have a gun in his home - is infallible.

Here's the kicker, though! Scalia, who wrote the opinion, acknowledged that the Second Amendment does allow for some gun control policies:

The Constitution leaves the District of Columbia a variety of tools for combating that problem, including some measures regulating handguns, see supra, at 54–55, and n. 26. But the enshrinement of constitutional rights necessarily takes certain policy choices off the table. These include the absolute prohibition of handguns held and used for self-defense in the home.

The decision still allows for sensible gun control policies. But progressives - and Hillary - don't agree with DC v Heller because they do not want to concede that an untouchable constitutional right to own a gun exists. In that sense, the case has essentially become for gun rights what Roe v Wade is for abortion rights - the foundation of constitutional arguments against overreaching gun laws.

For Hillary Clinton to stand there last night and pretend her opposition to the case was only about toddlers is insulting to the Constitution, to gun owners, and to Americans who believe the Constitution protects their right to own a gun.